Trigger WARNING! This article about rosacea caused by mites may trigger people with OCD, entomophobia, insectophobia, acarophobia, or other psychological conditions. Understand we all have trillions of living organisms on and in our skin and this article discusses what happens where there are too many on the face. Don’t read it if it will um, bug you.

Is your rosacea caused by mites? The thought is so gross, isn’t it!? But there’s a good chance those tiny little critters living on your face — Demodex mites —  might be the reason for your rosacea. If you’re searching for the best rosacea treatment, you can stop the Google search spiral.

Demodex mites live on everyone’s skin in small amounts, gobbling up bacteria and dead skin. In small numbers, they’re good, and you need them. But too many? Recent studies indicate an overgrowth of these facial mites is one of the primary causes of rosacea.

The worst was the medical professionals I talked to had little to no idea that these pesky bugs are taking over so many faces! So today, I’m going to share how to quickly treat rosacea caused by mites – for about twenty bucks.

No joke, and I’ll link to evidence-based research to prove it.

The Root Cause of Rosacea

The root cause of rosacea is thought to be a dysfunction in your body’s immune system, which upsets the natural balance of your body and weakens your immune system.

You can look and feel healthy on the outside, but what’s happening inside your body is what matters. A weakened immune system causes inflammation, an unhealthy gut biome, and vicious rosacea flares that worsen with time and age.

Left untreated, it tends to worsen over time.

[Rosacea is] A condition that causes redness and often small, red, pus-filled bumps on the face. Rosacea most commonly affects middle-aged women with fair skin. It can be mistaken for acne or other skin conditions. Key symptoms are facial redness with swollen red bumps and small visible blood vessels. Treatments such as antibiotics or anti-acne medications can control and reduce symptoms. Left untreated, it tends to worsen over time.

Getting Diagnosed With Rosacea

Over the past twenty years, my face went from smooth and clear as a baby’s bum to looking angry and old – mottled, dry, red, and crazy inflamed. My nose was the worst, sunburnt red all the time.

Getting a facial before my wedding in 2018, my esthetician refused to perform a microdermabrasion I scheduled. She said my skin was too damaged to have sand shot across it. I was officially diagnosed with rosacea in my mid-30s, though I’d had it for years.

Even quitting drinking didn’t help. It was too late.

The search for a cure started. I’m a researcher by nature, so I went down the Google rabbit hole. There w
asn’t much to find. A few years ago, the only treatments I could find were expensive and prescription only. The published studies and findings mainly were for treating rosacea flares, but I wanted to find treatment for the root cause, not just the symptoms.

How I Was Told To Treat My Rosacea

Doctors, estheticians, and the very nice ladies at Ulta all suggested different ideas and treatments. I wanted a natural rosacea treatment, free of endocrine-disrupting hormones, which eliminated SOOO many brands.

At various stages, professionals told me to:

What Rosacea Treatments (Sort Of) Worked

For years, I resisted spending hundreds of dollars on treatment. However, I’m sure I paid it anyway by constantly trying new makeup and skincare products. I oil cleansed for a long time, but I was constantly dehydrated, so my skin could handle it. Once I stopped drinking alcohol regularly, oil cleansing made me break out.

Biossance cleansers and moisturizers worked and didn’t make me break out, but they also didn’t treat my redness from the Type I rosacea. Trying new products was tricky, and everything would cause my Type II rosacea acne to flare.

But when even my foundation started looking bad – getting cakey and showing dry spots off – I knew it was time to get professional help.

Finally, in the spring of 2022, I caved and tried two Intense Pulsed Light Therapy (IPL) treatments for rosacea. While two treatments helped a bit, it wasn’t enough to justify $250/session!

And then I found a paper on Demodex mites that changed my life — like I hope this one will for you!

Rosacea Caused By Mites, For Real?

Yes, rosacea caused by Demodex mites is a real thing. If your body’s defense system is shot, it can’t fight off tiny little bugs taking over your face. Rosacea caused by mites worsens over time and never goes away on its own — unless you take control.

But first, understand everyone has these mites (and a ton of other little bugs) on their faces. It’s normal. But too many lead to inflammation and bacteria build-up.

Rosacea worsens over time. I’ve spent years hoping to wake up one morning with magically clear skin, but the opposite kept happening. My rosacea was getting worse, and I started developing a hive-like rash when I ate spicy foods or drank red wine.

Which makes sense when you think about it. My immune and inflammatory systems were out of whack, largely due to my diet which included way too much sugar, alcohol, and high-histamine foods.

This isn’t an article about cleaning up your diet, but consider this a big wake-up call that you need to cleanse your body to treat your face! Phoebe Lapine has excellent food and detox solutions on her website that you should check out.

How Do I Know If I Have Rosacea Caused By Mites

Okay, here it is — how can you tell if you have rosacea caused by mites? And caused means the symptoms showing, not the root cause, which is your immune system needs help.

The short answer is you don’t know if you have rosacea caused by mites. The only way to diagnose Demodex rosacea is to go to the doctor and have a skin sample put under a microscope to count the little buggers.

BUT people with rosacea typically have ten to eighteen times more Demodex mites living on their faces than “normal” people.

The chances are that if you have persistent facial redness, you have too many Demodex mites and their associated bacteria on your face.

Here’s my before and after just one week of treatment: 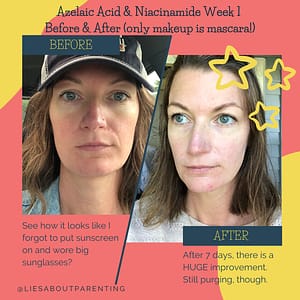 Okay, so what does rosacea caused by mites look like? Rosacea flares in so many different ways it can be hard to tell if it’s caused by mites or something else, like a reaction to skincare products, environment, or diet.

Have you ever heard of Azelaic Acid? It’s an Alpha Hydroxy Acid that’s plant-derived. You put it on twice a day for a few weeks, and it helps kill the Demodex mites that cause rosacea flares.

If you have rosacea symptoms, this simple treatment could change your life. My skin went from looking sunburnt all the time to clearer and smoother: 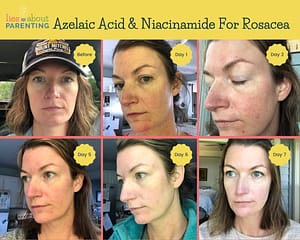 All because I finally figured out what was going on with my skin!!

Azelaic acid comes in a more potent prescription form. Still, this over-the-counter 10% azelaic acid treatment has worked for me.

Here’s one I love from Amazon:

What To Expect As You Treat Demodex Rosacea

Here’s what happens. The azelaic acid kills the mites, but the little buggers spent a bunch of time gobbling up bacteria off your face. This bacteria gets released back into your skin as they die off, causing acne and crazy breakouts. So gross, but true. All this crap has to work its way out of your skin.

Here’s what my skin looked like over the first week:

Get yourself a bunch of these two things:

Or get this one, which has everything you need in one serum!

You only need the azelaic acid to treat rosacea caused by mites. Still, your skin’s natural moisture barrier is likely compromised at this point, too. Putting niacinamide on before the azelaic acid (or with it, if you buy the all-in-one) helps repair your skin’s defense system.

How I Apply Azelaic Acid

I apply the suspension morning and night to clean skin, then pat moisturizer on top twice a day.

Some people have to work up to this, but you know your skin. You can always start by applying a few times a week, then gradually increase. You’re an adult – make intelligent choices for your skin. My skin had no problem with the twice-daily application, in the morning and night.

If you can only apply it once daily, do it at night! Otherwise, morning and night. You’ll likely need to moisturize on top of it. I love this moisturizer with probiotics in it from Biossance.

How To Tell Your Demodex Rosacea Treatment Is Working

Be sure to do a patch test first!

Once you start applying the product, expect your skin to get worse. Seriously, it’s awful, but it’s all the gunk working its way out. At first, I thought I was reacting to the products. Still, after about a week, the acne and the generally sad state of my skin started drastically improving.

Acne and comedones (bumps on the skin you can’t see) will occur in areas where you’re prone to breaking out. Suppose you start getting a ton of acne or rashes where you don’t typically breakout. You might be having a reaction, or the product is too strong, and you need to apply less frequently.

The redness started to fade after the first few days of treatment, and I noticed a vast improvement after one week. It can take a month to clear your skin of all the dead mites that caused your rosacea flares, so be patient. It’s worth it!

People on Reddit in the rosacea forum are obsessed with azelaic acid. Reddit is an excellent place to go if you want to hear more first-hand accounts of treating rosacea caused by mites. Finacea is the Rx version of azelaic acid. Another commonly used treatment is ivermectin (yeah, the horse dewormer of COVID-19 fame), but it’s prescription only.

If you don’t have hundreds of dollars to spend on rosacea doctors, lasers, and prescriptions, consider giving azelaic acid and niacinamide a try! Too many Demodex mites are a leading cause of rosacea flares. Still, you can diminish the symptoms with over-the-counter azelaic acid.

Remember, rosacea’s root cause is believed to be dysfunction in your immune and inflammatory systems. It’s worth trying out a low FODMAP or an elimination diet to see if certain foods like onion, dairy, and white flour are triggering your rosacea flares.

But the fact remains that rosacea sufferers have ten to eighteen times the usual amount of Demodex mites on their faces. If you have rosacea, azelaic acid may be an excellent treatment option.

Be sure to patch test and talk to your doctor if you have concerns about your rosacea. As the mites die off, your skin will worsen before you see any improvement. It can take up to a month! If you decide to try azelaic acid to treat rosacea caused by mites, let us know how it goes in the comments below!